Click here to go the UCL 'COSMOPARTICLE INITIATIVE'
Click here  to go to a related blog about the day I showed the COSMOPARTICLE to Sir David Attenbourgh at UCL
At the beginning of 2017 I was commissioned by the University College London’s Cosmoparticle Initiative to produce an oil on canvas painting to capture in a nuanced view the interconnection between cosmology and particle physics. I wanted to give new life to their ideas, while at the same time representing concepts from particle physics and cosmology as faithfully as possible.

I created this through extensive consultation with Professor Hiranya Peiris and Dr Andrew Pontzen of the Astrophysics Group and Dr Chamkaur Ghag of the High Energy Physics Group, studying their research in great detail over many months: Prof Peiris’s studies of cosmic background radiation, Dr Pontzen’s simulations of the formation of galaxies, and Dr Ghag’s work on the direct detection of dark matter particles.

I love all parts of a commission, but especially the initial stages, taking everyone’s ideas together and letting them ferment in my mind and assimilate into visual representations. I feel like some kind of cathode galvanizing the wonderful work of physicists.


I used six different layers of paint, each overlaying and interacting with the next – to represent a specific number of phenomena: the tracks of charged particles, dark matter filaments, cosmic background radiation, galaxy formation, gravitational waves, and – to represent the birth of the universe – images of the blood vessels in a human brain taken with an MRI scanner.

As I layered the paint, I literally used my brush to ‘pull’ galaxies through from the first layer of paint to the next – In this way I wanted to created a feeling of connection between regular matter and dark matter.

And for the finishing touches: a few bubble universes, galaxy clusters, black holes, neutron stars, pulsars, complex geometric shapes, and the “monolith” from 2001: A Space Odyssey tucked away on the left hand side.
It was an extraordinary honour to be given this opportunity to create an artwork about this subject matter – I felt like I could become absorbed with its meaning and do the ideas justice. The words of Andrew and Hiranya, explaining that ‘out of complexity comes simplicity,’ echoed in my head and Dr Ghag's and I's conversation that led to me placing bloodvessel structure of the human brain from MRi scans provided by Ian Driver from CUBRIC of one of the first images derived from the new 7 Tesla MRi Machine. I wanted the painting to have that essence; ‘out of complexity comes simplicity’. I feel that despite the complexity of the layered painting it has a coherent unity - just as the universe does, with all its overwhelming complexity held together by underlying, unifying principles.
The painting, measuring two metres wide and nearly two metres high, hangs in the new Cosmoparticle Hub, and reproductions are available from the Gallery page click here.

Video- capturing the development of COSMOPARTICLE over 5 months, interlaced with visual date and ideas.
For further reading go the UCL page.... click here 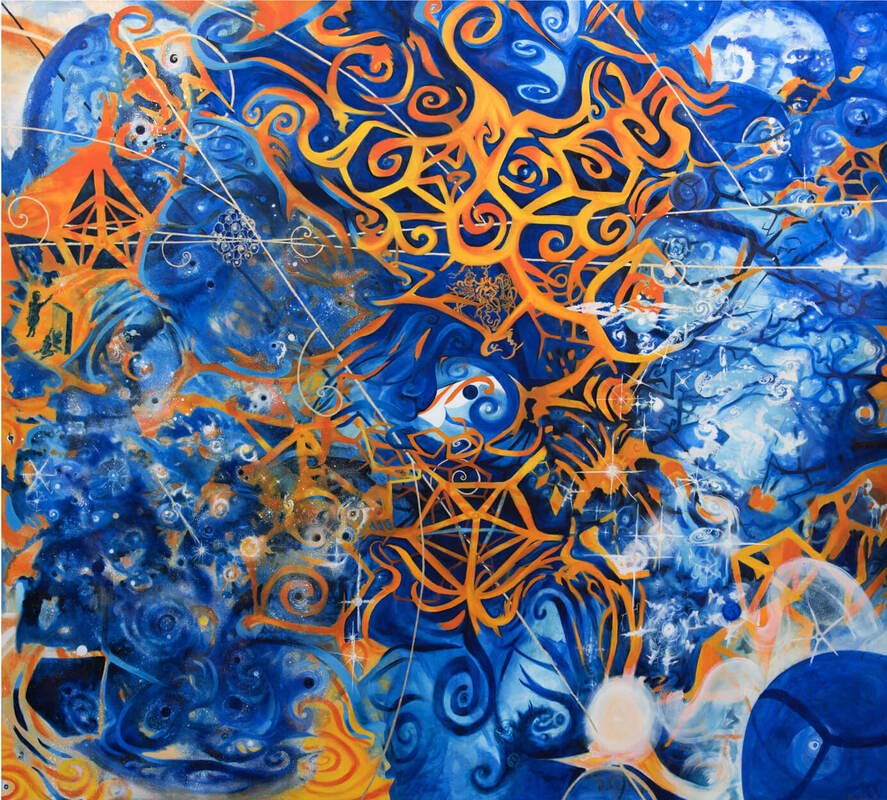